Monsanto should eat its own GMOs and see what happens, see if they develop any tumors. Eating GMOs doesn’t work out too well for rats.  In 2012, Gilles-Eric Seralini, a University of Caen professor in Normandy,  fed rats NK603 corn and Roundup weedkiller. They developed liver disease, kidney disease, mammary tumors. Seralini was attacked and roundly vilified by Monsanto, its well paid scientists and minions in the mainstream press.

The next Monsanto gambit was to set up former Monsanto scientist Richard E. Goodman in a newly created biotech editorial position at the journal Food and Chemical Toxicology. FCT had peer reviewed and published Seralini’s study “Long term toxicity of a Roundup herbicide and a Roundup-tolerant genetically modified maize.” With Goodman’s lead, editor-in-chief of FCT, Wallace Hayes, removed Seralini’s paper from the journal. It was a breach of protocol that would not go unnoticed by hundreds of legitimate, non-GMO backed scientists.

Ex-Monsanto employee Richard Goodman has since been removed himself from the Editorial Board of the Journal of Food and Chemical Toxicology (FCT), as was Hayes. The former editor had admitted the study was not fraudulent or inaccurate, but claimed it was inconclusive, which was lame, moot criticism. Scientists not on Monsanto’s payroll explained that peer reviewed published studies are often inconclusive; they recommended further studies.

To further show their allegiance to Monsanto, around the same time frame as they were stifling Seralini’s unfortunate (for Monsanto) findings, Hayes also pulled another FCT-published study which raised grave doubts about the safety of Monsanto’s poison food program. This one was a Brazilian study which proved Monsanto’s Bt corn insecticide starter genes do not disintegrate in mammalian stomachs as claimed by Monsanto; they survive intact to harm the blood cells of mammals (er, including us). That study has now been published in another journal. 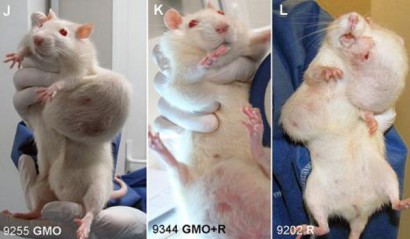 Pro GMO scientists made several claims about the Seralini study and the rats he used, claims which are easily refuted if you’re not listening to the mainstream media’s charitable rendition of those claims. Pro GMO voices claimed the wrong rats were used, that the rats used tend to have spontaneous tumors, that Seralini didn’t use enough rats. Perhaps he should also use some bigger rats next time, the two-legged kind pushing GMO’s, the rats who have told people that glyphosate in Roundup is safe enough to drink. Let them drink some themselves, and eat some GMOs and see what happens.

Roundup and GMOs not Safe

Seralini concluded that Roundup herbicide and Roundup resistant GMO corn is not safe. He concluded that further studies are needed prior to anyone’s approving it. (Would that anyone in the U.S. government were listening.) Natural News gives a more indepth scientific analytical review of the Seralini arguments.

Somebody was listening to Seralini.  France banned glyphosate.